We’ve conducted some initial analysis of our data from last Friday (more here). Our goal was to be able to better visualize our sample data along the stream corridor. As a geographer, I turn to a map as my first impulse, but in this case, it’s certainly not the only way of viewing our data. In particular, we were interested in comparing the values from each of our units and better visualizing trends on our metrics along the stream corridor.

So, from our magic GIS hat, we pulled out some dynamic segmentation tools to “linearize” the data we’ve collected. Put simply, we moved each data point to a stream center line as defined by USGS’s National Hydrography Dataset (NHD) yielding a distance along the stream. We could then plot our metrics, e.g. dissolved oxygen, versus distance along the stream in a conventional scatterplot allowing us to compare our two sample units and samples through time.

Here’s a visualization of the “linearization” of our data: 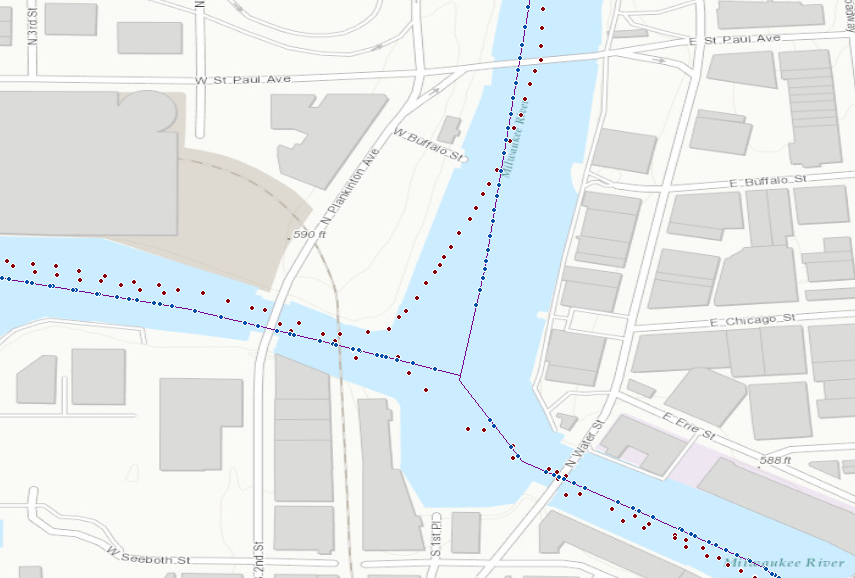 In ArcGIS, each data point (in red) was moved to the NHD stream center line (points in blue) if it was within 100 meters of the center line. In addition, each new blue point was given a distance along the stream stretch.

As of yet, these data are unfiltered. We haven’t removed known extraneous and/or invalid readings.

First, data from the Kinnickinnic

(which can be compared to the map here)

Dissolved oxygen is also very similar (thankfully, after quite a struggle) between the two units. The mess to the left in the graph is explained below.

Electrical conductivity also shows close correspondence between the two units except with fairly high values. We use a two point calibration at 84 uS and 1,413 uS, so this divergence outside the calibration range is not all that surprising.

Our pH values, while still exhibiting similar trends, show the greatest discrepancy between the two units that, disconcertingly, varies throughout the sample. We’ll be revisiting our calibration procedure for the pH probe to make sure we’re consistent with each unit.

For the Menomonee River

For the Menomonee, our units again performed similarly, with all but pH matching fairly closely.

Why the jagged or seemingly noisy segments? This is due to including both the paddle out and back along each segment on the same graph. So, for dissolved oxygen on the Menomonee for example, Unit #3 (in orange) returned significantly different values on the way out as compared to the way back in the 6,200 to 6,700 meter range. Mike, paddling Unit #3, took a different path on the way back in this segment and there appears to have been a significant cross-sectional change in the DO across the stream profile. Since we’re linearizing and combining both in- and out-paddles, our line graph bounces back and forth across these values.

Obviously, we still have a lot of explaining to do for each of these trends. We’ll leave that for another post for now. 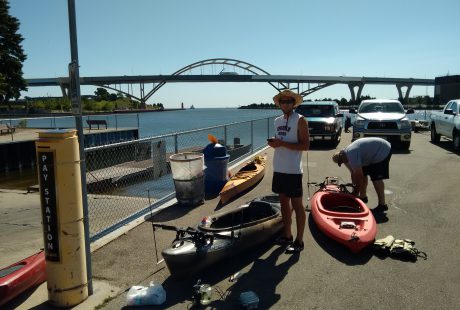